Highlights of 2022 in the field of gene drive research

As we step into 2023, we reflect on the successes and achievements of the year gone by and anticipate the promise of a new one. 2022 was an eventful year for the Outreach Network for Gene Drive Research, marked by a number of new findings and successful studies. 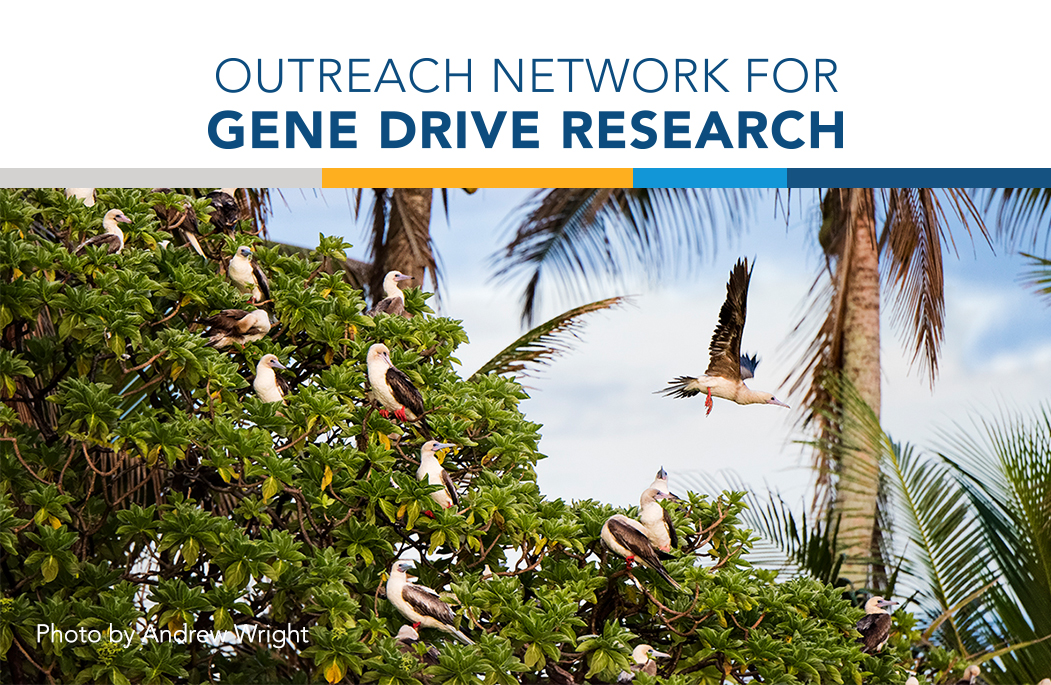 This past year, scientists associated with the GBIRd partnership, of which Island Conservation is a member, developed a world-first proof of concept for a gene drive technology to control invasive mice, providing new reasons for optimism regarding the potential use of gene drive technologies to help manage invasive mice that threaten island ecosystems. Researchers at The Akbari Lab investigated how genetic technologies could be applied to control lesser-known disease vectors and aid both conservation and public health efforts in the process. A team led by researchers from the University of California Malaria Initiative (UCMI) also explored mechanisms for the emergence of resistance in a gene drive strain of the African malaria vector Anopheles gambiae, finding that potential drive-resistant mutant alleles are generated largely during embryonic development.

In March, Target Malaria scientists at the Institut de Recherche en Sciences de la Santé in Burkina Faso received a shipment of live genetically modified mosquito eggs for work in containment, marking the launch of a new phase of the project’s work to develop gene drive technologies for malaria control. In May, researchers from the Insect Genetics Group and Imperial College London published a study exploring the design of a neutral gene drive in fruit flies, which contributes to a growing body of work on modular gene drives as a way to safely test individual components of a drive.

2022 was also fruitful for academic collaboration. Researchers from The Akbari Lab, the Ifakara Health Institute, the Institute on Ethics and Policy for Innovation (IEPI) at McMaster University, Revive & Restore, and colleagues published a paper exploring the value of developing a global gene drive project registry. A wide range of experts, including a number of Outreach Network members, also contributed to the second edition of Transgenic Insects: Techniques and Applications – which provides fascinating insight into this advancing field of research – as well as to the first edition of Mosquito Gene Drives and the Malaria Eradication Agenda – which offers a review of gene drive systems and novel applications for mosquito control and malaria prevention.

On the conservation side, Island Conservation demonstrated the remarkable impact invasive species removal can have on islands and their ecosystems, by publishing the first synthesis of all reported eradication events of invasive vertebrates on islands worldwide. Conservation X Labs announced the launch of the Extinction Solution Index, a new project to evaluate, compare, and rank the most effective and efficient solutions to the biodiversity crisis. Revive & Restore launched the Biotechnology for Bird Conservation program, in an effort to advance genetic technologies for bird conservation.

The year was also full of international conferences and webinars. In-person meetings came back in full swing, providing exciting opportunities for our members to share their work across the globe. Towards the end of October, representatives from the Ifakara Health Institute attended the 20th International Congress for Tropical Medicine and Malaria (ICTMM 2020) in Bangkok, Thailand, delivering a presentation on the need to develop and invest in novel tools to eradicate malaria and providing an overview of the work they are carrying out with colleagues from Imperial College London to investigate gene drive technologies for malaria control. Members of the Outreach Network also convened at the American Society of Tropical Medicine & Hygiene (ASTMH) Annual Meeting in Seattle, United States, where the University of California Malaria Initiative (UCMI) co-organized a symposium on the topic of gene drive mosquitoes in the fight against malaria and gave a presentation about the initiative’s progress towards conducting ecologically confined field trials. Finally, during the 8th Annual Conference of the Pan-African Mosquito Control Association (PAMCA) in Kigali, Rwanda, researchers from Target Malaria and the Liverpool School of Tropical Medicine facilitated a 3-day training course designed to provide participants with a basic technical understanding of gene drive technologies, which was attended by representatives of Indigenous Peoples organizations. During the Conference, the Outreach Network also delivered a policy engagement workshop to fifteen young African scientists as well as a series of social media workshops that brought together over twenty early-career researchers. 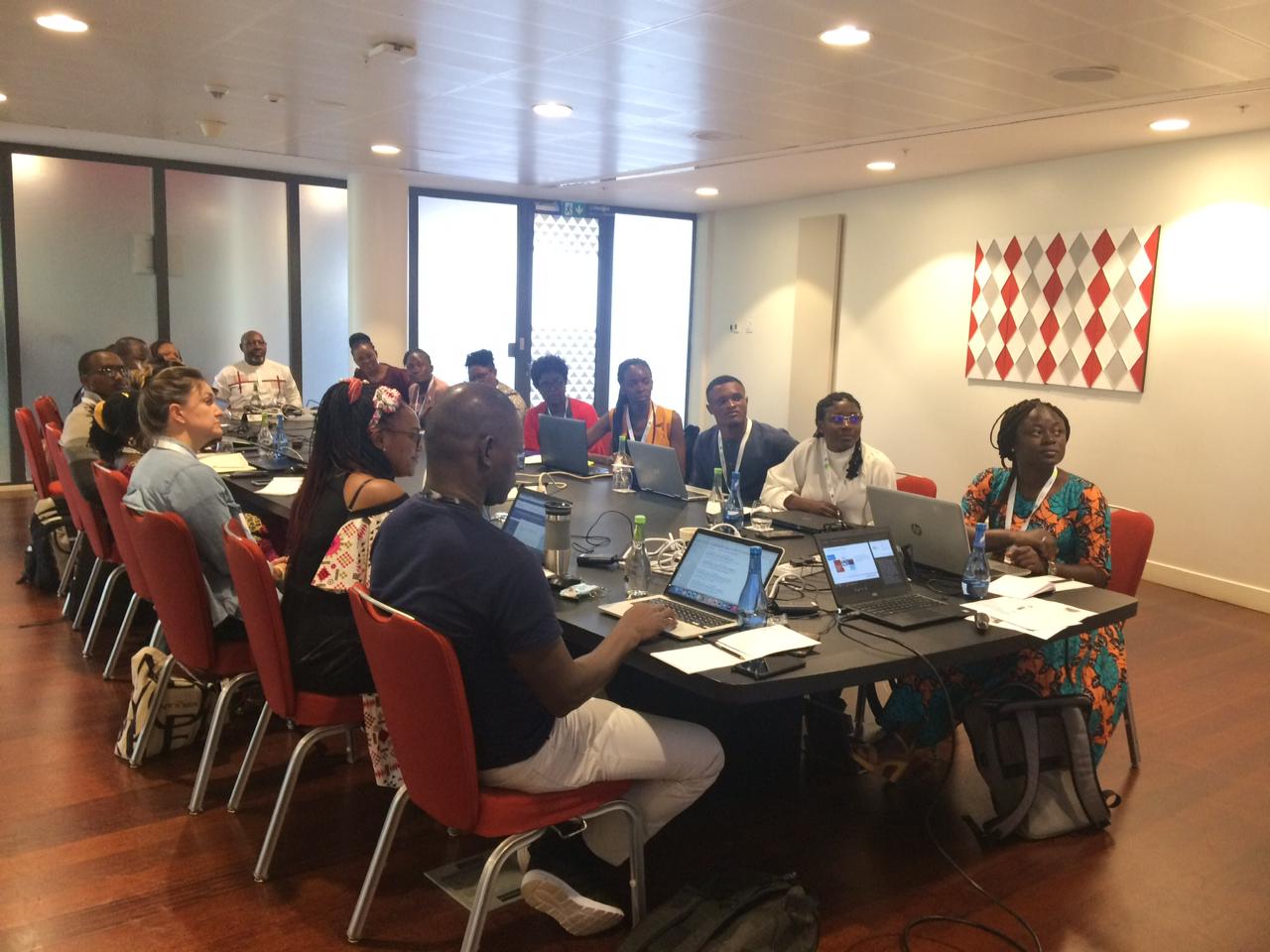 Some of this year’s learning was also done online. Malaria No More hosted a two-part webinar series to raise awareness of the importance of research and innovation to achieve a malaria-free world: “Path to Zero: Innovations to End Malaria”. Throughout the year, the Outreach Network, in partnership with ISAAA’s SEAsia Center, hosted the 2022 Gene Drive Webinar Series. The three virtual sessions, which aimed to help promote a productive and balanced conversation on gene drive technologies, their oversight and regulation, gathered a total of around 90,000 participants across different platforms. The series was accompanied by a set of co-authored policy briefs focused on the topics of risk assessment and environmental, socio-economic and health impact assessments for gene drive organisms, which can be accessed on the Network’s website. In 2022, the Outreach Network also released three new videos from its Gene Drive Series on its website and YouTube channel. The series invited a selection of experts in the field to address some of the most frequently asked questions on gene drive research.

2022 was also a crucial year on the policy front. Following four years of protracted negotiations, Part II of the Fifteenth meeting of the Conference of the Parties to the Convention on Biological Diversity was held in December, in Montreal, Canada, culminating in the adoption of the Kunming-Montreal Global Biodiversity Framework (GBF), which sets out a roadmap for governments and other stakeholders to conserve the world’s biodiversity over the next decade and beyond. The new Framework includes several targets relevant to gene drive research, which emphasize the role of science and innovation in supporting the GBF’s achievement – these include Targets 20 and 21, as well as Sections C and K. Important decisions were also taken on several other agenda items relevant to gene drive research, with the decision on synthetic biology  establishing a process for horizon scanning, monitoring and assessment of the most recent technological developments in this field, and countries agreeing to develop voluntary and additional guidance to support the risk assessment of gene drive organisms.

As part of the Conference, the Outreach Network, RMIB-LAC, and IIFB co-hosted a side-event to showcase joint initiatives held between 2020 and 2022 to promote dialogue and understanding between Indigenous Peoples organizations and different stakeholders from research and conservation organizations interested in developing gene drive technologies. Speakers shared outcomes of the different initiatives through a selection of case studies, highlighting the successes achieved and the challenges encountered along the way to an audience of around 70 participants.

At a side event co-hosted by the Outreach Network, speakers talk about initiatives to encourage communication between IPLCs groups and organizations interested in developing gene drive technologies.

We wish everyone a happy and healthy new year and look forward to a successful 2023 in the field of gene drive research.