After two weeks of extensive negotiations, the most important gathering on biodiversity in many years concluded on December 19th. The Fifteenth meeting of the Conference of the Parties to the Convention on Biological Diversity (CBD) saw the long-awaited adoption of the Kunming-Montreal Global Biodiversity Framework (GBF). It defines the roadmap for governments and other stakeholders to conserve the world’s biodiversity over the next decade and beyond. 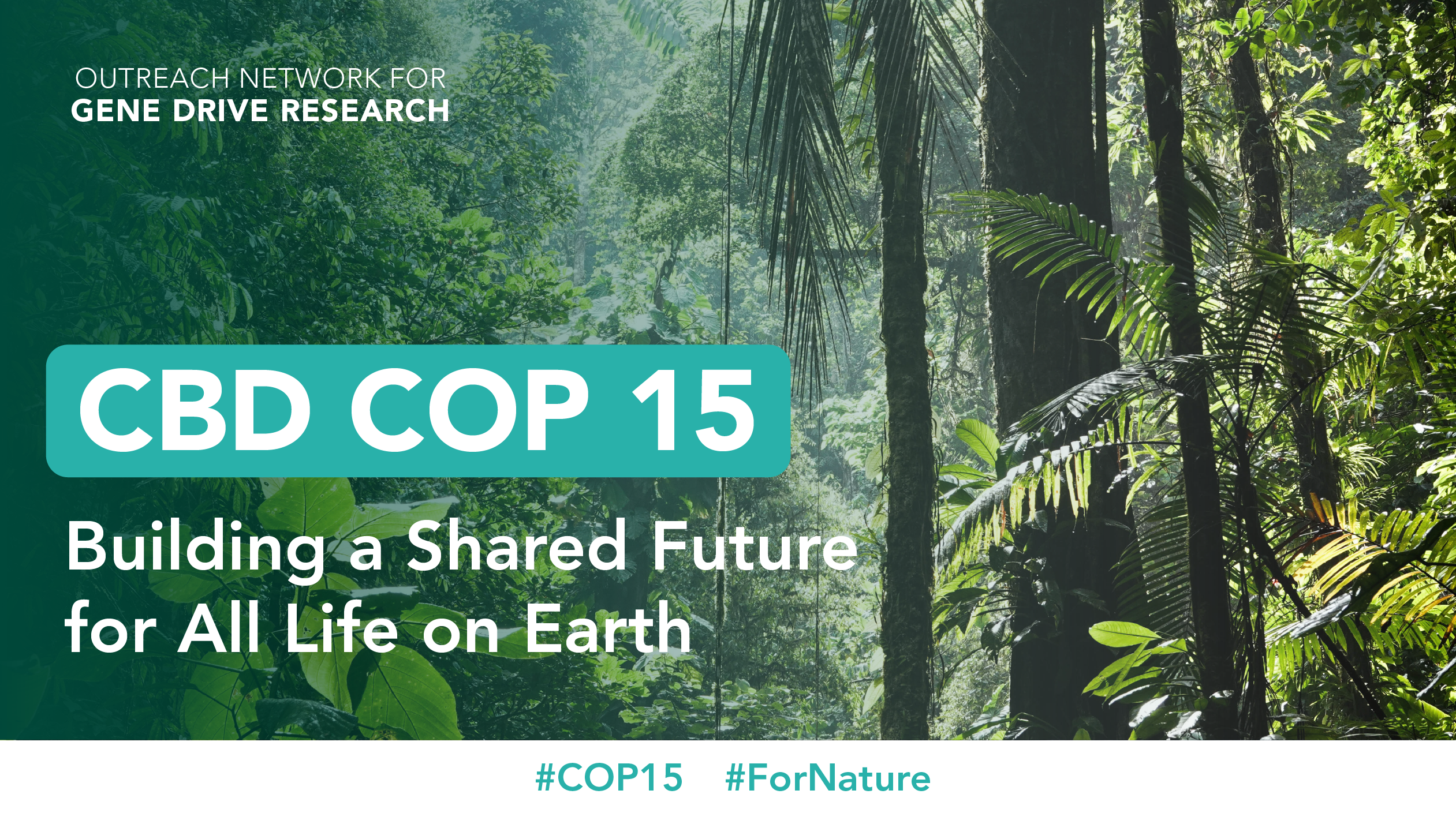 A key part of the GBF is a set of Goals and Targets to guide action until 2050. There are several targets relevant to gene drive research, which emphasize the role of science and innovation in supporting the achievement of the GBF. Increasing scientific cooperation, access to scientific information, access to innovation and technology, and raising awareness on the critical role of science, are featured in Targets 20 and 21, as well as in Section C and Section K (g). The text of Section I also recognizes the need for cooperation for capacity building and transfer of technologies.

Unfortunately, the texts of Target 17 on biosafety and biotechnology and Target 6 on invasive alien species (IAS) could have been further strengthened. While Target 6 recognizes that islands are a priority for controlling invasive alien species, it fails to acknowledge the need for novel tools to manage them. Target 17, also falls short on delivering forward-looking language reflecting the recent progress in the field of biotechnology, despite containing balanced language on the potential risks and benefits.

However, the plan for Capacity-building and development and technical and scientific cooperation recognizes the need to support the development of biodiversity-related technologies and innovations, including biotechnology.

Beyond the GBF, other relevant items on the agenda included synthetic biology under the CBD and risk assessment under the Cartagena Protocol on Biosafety. The synthetic biology decision establishes a process for horizon scanning, monitoring and assessment of the most recent technological developments in that field. The ability to generate a compelling report in a timely manner will be the test of this new process, as innovations move quickly. For risk assessment, a process to develop voluntary and additional guidance to support the risk assessment of gene drive organisms was agreed upon. This guidance will complement existing guidance and regulatory frameworks and will hopefully be useful for policymakers and regulators as they consider how responsible research or releases of gene drive organisms could be conducted in their countries in the future. A new capacity-building action plan for the Cartagena Protocol was also approved during the Montreal meeting, which will help bolster Parties’ ability to implement effective biosafety measures.

Two relevant side events were also held in the first week of CBD COP15 meetings. The Outreach Network, RMIB-LAC, and IIFB co-hosted a side-event to showcase joint initiatives held between 2020 and 2022 to promote dialogue and understanding between Indigenous Peoples organizations and different stakeholders from research and conservation organizations interested in developing gene drive technologies. The GeneConvene Global Collaborative and the African Genetic Biocontrol Consortium also held a side-event on capacity strengthening for risk assessment of new biotechnologies in Africa. 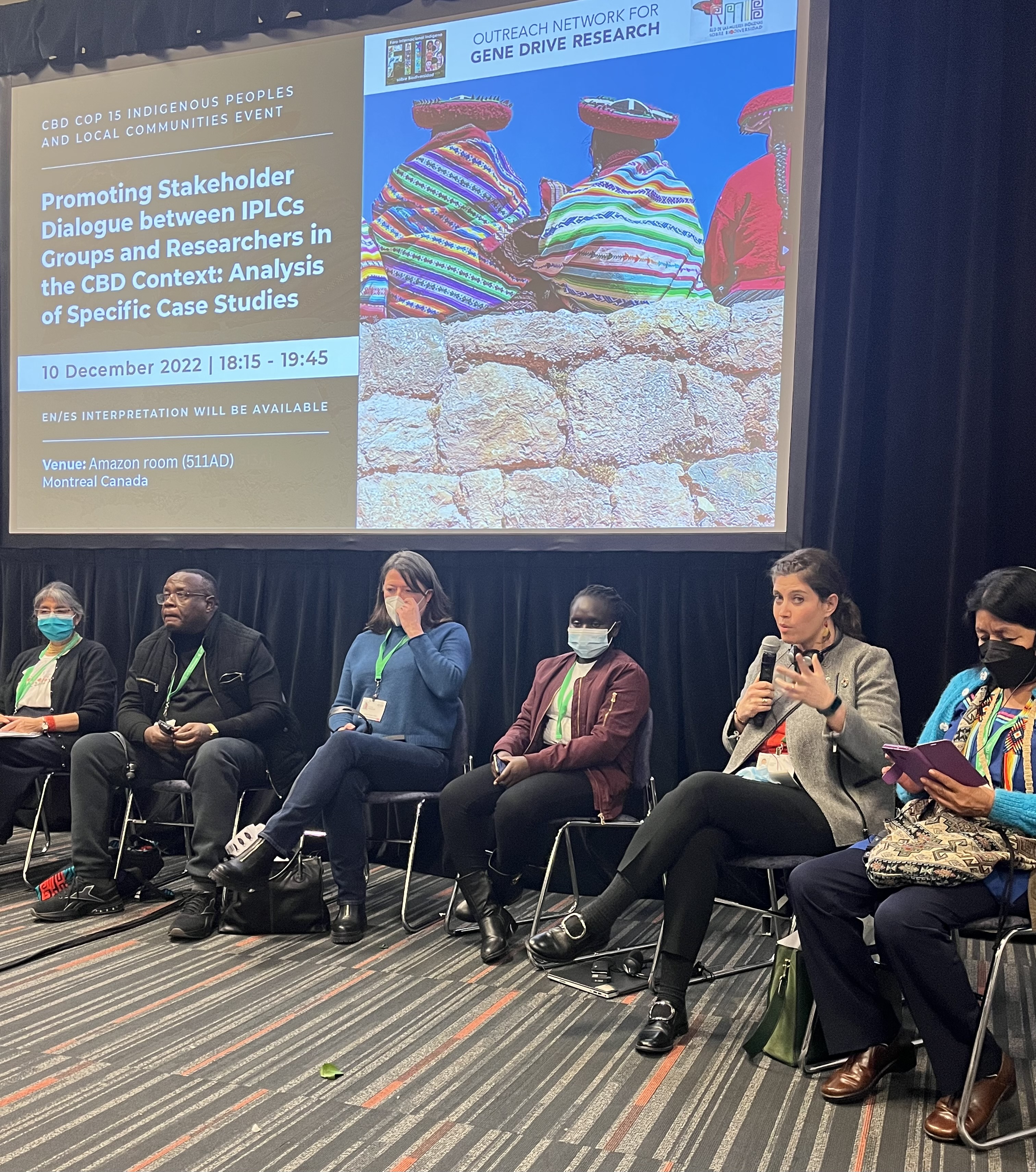 Speakers discuss initiatives to promote dialogue between IPLCs groups and organizations interested in developing gene drive technologies as part of the Outreach Network's side event on the topic.

The summit in Montreal has been regarded as the “last chance” for nature’s recovery. Although the adopted Framework does create an enabling environment for innovation and for the development of new tools for conservation, its success will depend on the capacity of nations to implement the numerous commitments made in Montreal, many of which hinge on the access and use of science, technology, and innovation.